Pension Prophets: The only certainty is uncertainty

PP's Pension Prophets panel - Roger Mattingly, Robin Ellison, Jennie Kreser and Malcolm McLean - will be speaking at PBUK on 25 June. Jonathan Stapleton asks them what's on their mind ahead of the event.

We are in limbo at the moment because there are so many things pending. We are waiting for a new pensions bill and, while we know roughly what's in it, we don't know the nitty-gritty details - so we have to keep an eye on that and make sure that whatever comes out in terms of consolidation, in terms of the dashboard, and in terms of collective defined contribution (CDC) is in the best interests of the consumer.

In addition, I think there is a big case for doing something about tax relief and allowances, I really do. While we've had the system in place for a number of years, it has changed. Pension freedoms have introduced the money purchase annual allowance, for example, which is causing problems. And of course, we've got this big row going on at the moment with the doctors on the tapered annual allowance, which to my mind is a complete nonsense and really ought to be scrapped completely as soon as possible.

In terms of where we are at the moment, we want to be positive about the future. But I believe a number of things will determine whether in fact things work out as we'd like to see them. And of course, a lot depends on what sort of government we have going forward - all of which could have different priorities.

Consolidation, if it's done well, could be hugely beneficial - potentially leading to better governance, better value for money, increased diversification, more regulatory clarity, better risk management, better member protection, and better member engagement. But if it's not done well then it could result in a much reduced marketplace, less competition, less creativity, and could potentially squeeze margins to the detriment of standards.

Building on what Malcolm said, I think the only certainty we're facing at the moment is uncertainty. I sometimes feel that we tend to forget kind of why we're here. And what we're actually here to do is to provide a good outcome for our pensioners.

I think there is a scandal waiting to happen with the pension freedoms and there is a generation that will suddenly find that - having potentially spent a significant proportion of their pension on paying off their mortgage, buying a new house and so-on - they come to retirement with very little left.

My key concern is that we need to always have the consumer front and centre. As an industry we can talk about the fine points of investment policy until the cows come home. At the end of the day, what the member wants to know is that they have a safe, secure and decent pension when they come to retire.

I think things are looking up actually - both because of the Brexit impasse and also because of the potential of Boris Johnson becoming prime minister. If Boris does get in, there would be less legislation and regulation as I don't think he'll get anything through - and his inclination is to regulate less too.

In addition to this, I think there are new pension systems coming online to help people understand pensions better and I think the growth in the number of elderly people will mean the politics are going to change as people age - which will lead the government to make life easier for pensioners.

Echoing Malcolm's thoughts, I think there's also a head of steam building up against the absurdities of the tax regime. And there are changes in regulation - the Pension Protection Fund has a new regime, which has really started to change the tone of the organisation, and there is a new team at The Pensions Regulator, so it's possible that the regulatory framework will improve as well.

Pensions and Benefits UK (PBUK) - London's largest pensions and benefits event - will take place on 25-26 June at The Brewery on Chiswell Street.

The event will see a total of over 100 speakers presenting over the two days - including The Pensions Regulator chief executive Charles Counsell and pensions and financial inclusion minister Guy Opperman.

It will also feature a keynote from our guest speaker, former MP and Strictly Come Dancing star Ed Balls.

To find out more about the programme - and to register for a delegate place - please visit: www.pensionsandbenefitsuk.co.uk. Five stories you may have missed this week﻿ 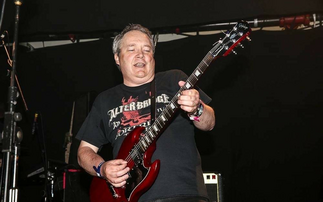 3173 collective re-form band in a bid to raise money for charity, Nordoff Robbins